On 15 March, we organised a debate, hosted by MEP Roza Thun, to discuss the ICT sector’s carboon footprint challenge. The MEP was joined by the following guest speakers: 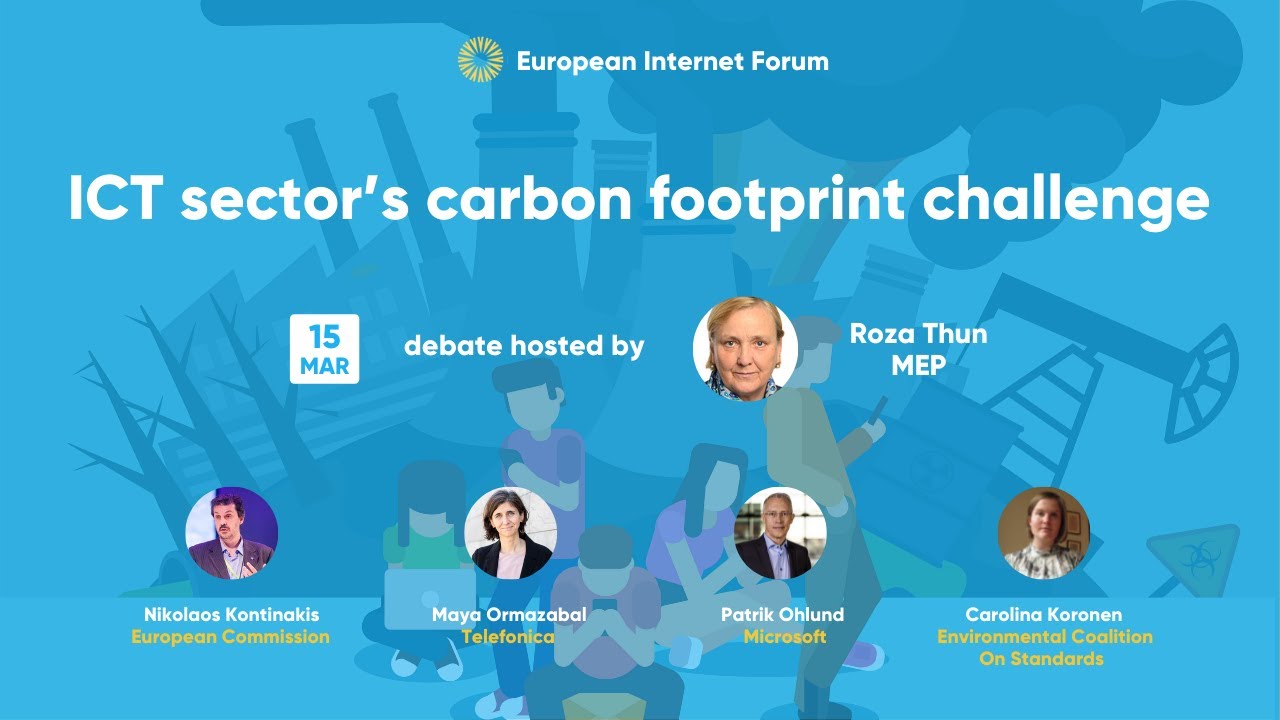 Roza Thun MEP opened proceedings by highlighting the immense role that ICT has played during the covid pandemic, while also stressing the increasing awareness of the environmental impact of ICTs, which is growing in a time when our world must become more sustainable. The MEP offered a few examples, among which the artificial cooling of data centres and stated that the ICT carbon footprint is expected to exceed by 2030 the one of the airplane industry.

In Nikolaos Kontinakis’ opinion, the benefits that ICTs bring should not be ignored, despite the increase in energy consumption. As part of the Green Deal in the Fit for 55 package, the Commission has proposed some provisions for data centres specifically in the energy efficiency directive, namely the use of renewable electricity and water. There are numerous activities, studies going on trying to see how to deal with this problem without breaking the dynamism and the necessity to have digital solutions, as they have a lot of multiplying effects for the rest of the economy.

Maya Ormazabal, a telco representative, acknowledged the importance to minimize the impact of their own operations, while at the same time supporting companies to decarbonize through the deployment of products and services. “Climate impact and security are already part of our strategy”. Ms Ormazabal added that strong networks are going to be critical now to achieve the green targets set in Europe and that, despite the 75% renewable energy consumption by ETNO operators, there is a need to deploy 5G and optical fiber networks and switch off legacy networks which are much less efficient.

Patrik Ohlund offered some examples of actions taken by Microsoft to become carbon neutral, as energy is one of the main components running its data centers: “we decided early on to move into running on 10% renewable energy and we are on track to reach 100% by 2025. “By 2050, we will have removed all the historical carbon that we have ever emitted directly or through electrical consumption since Microsoft started back in 1975”. According to Mr Ohlund, all datacenter workloads increased 9x and Internet traffic by 17x. Still, data center energy use has remained almost constant, by modernizing and boosting their efficiency. Moreover, all electricity put in these data centres is transformed to heat which can then be used either to keep a stable temperature in the centres or heating homes through a district heating system.

Carolina Coronen shared another perspective with new system boundaries: to move from the product level to view the environmental impact of services, while considering sufficiency alongside efficiency when talking about resources. Ms. Coronen called for efforts to develop an indicator that captures a more complete picture of data center efficiency, including IT equipment efficiency and, perhaps more importantly, software energy efficiency. Building on this indicator, you can develop a definition of what consituttes a sustainable data center, completed by other sustainability criteria touched upon earlier in the discussion, then setting targets and legislative measures that can actually ensure compliance and deliverance of the targets. In conclusion, Ms Coronen asked for the issue of a standardization request to have this indicator developed, which can come alongside policy efforts and speed up the process.