On 16 November, EIF organised a debate co-hosted by MEPs Pilar del Castillo and Miapetra Kumpula-Natri on The Data Act with a focus on the opportunities and challenges towards a fair and innovative data economy. The MEPs were joined by the following guest speakers: 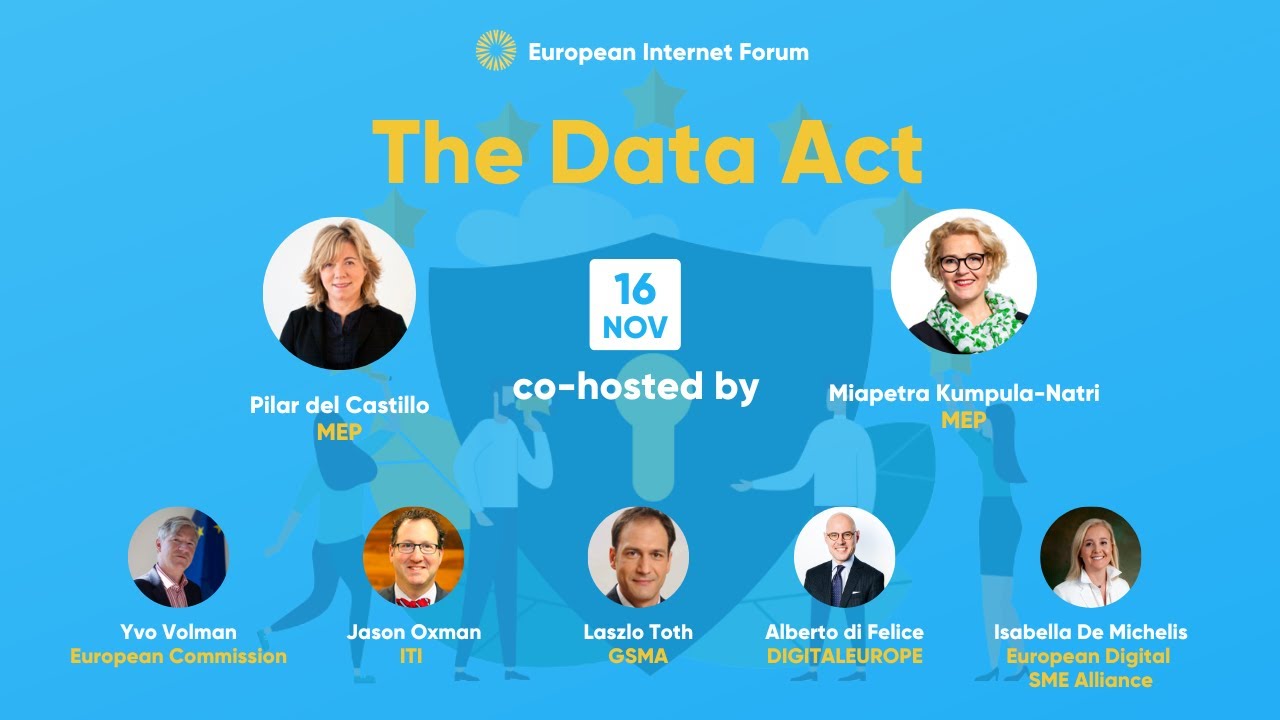 53:03
The Data Act – opportunities and challenges towards a fair and innovative data economy

Maria Rosa Gibellini, EIF Director General moderated the debate and read the speech of MEP Pilar del Castillo, who was unable to join the debate for health reasons.

MEP Pilar del Castillo declared that industrial data is a growing competitive asset for Europe. Consequently, the Data Act will contribute to optimise business models and processes as well as boost the development of new ones. A data agile ecosystem is needed to enable easy access to high-quality industrial data. On the one hand, the user should have access to the IoT data produced and be able to share it. One the other hand, data produced by prototypes or products not placed in the market should be excluded in order to respect IP rights and trade secrets. Considering the Commission proposal, Ms. Del Castillo stressed that it is fundamental to better regulate the role of actors that provide data access to the user and to the data recipient. Regarding business to government data sharing obligations, the Data Act can be instrumental when public authorities would need data to overcome a crisis, although the concept of ‘exceptional circumstances’ needs further clarification.

MEP Miapetra Kumpula-Natri opened her speech by declaring that data are at the core of the European digital age, underlining the importance of interoperability, data portability and European standardisation. The use of data is pivotal for a number of reasons: to improve services on health research and traffic learning throughout all sectors; to support European SMEs in taking control over the data they produce; to have the freedom to choose among more options and better services. MEP Kumpula-Natri acknowledged that, digitalization has an impact of citizens. As a result, the EU must lead this societal development by empowering individuals, customers and the public sector in the use of data for a number of reasons: better real-time services, climate action, better quality jobs. The Data Act will play a critical role in this development, especially in enhancing a European competitive and fair data economy.

The European Commission representative, Yvo Volman, affirmed that data are important not only for the industry, but also for societal reasons. The rationale behind the EU data strategy is that data should flow between countries and sectors and be available for use and reuse. This needs to be done according to European values and data protection rules. Furthermore, it is fundamental to regulate who can access and use data. He argued that there is a real strategy combining legislative actions with investments in data technologies and in data infrastructures. Mr Volman defined the Data Act a fair allocation of the value of data. On one hand, investments in data must be incentivised. On the other hand, it is necessary to give more control over data generated by citizens and companies. He recognised that the pivotal question behind the Data Act is “who gets access to the data and in which conditions”. The aim is to provide more clarity across different sectors and better identify how data can be accessed. He concluded by highlighting that this is a pivotal moment for the data economy and the Data Act is a pioneering framework reflecting European values.

Jason Oxman expressed the importance of the Data Act for the entire spectrum of the data value chain. Mr. Oxman focused on the cloud and international data transfer provisions of the Data Act and touched upon several points. First, the cloud and portability provision in relation to the termination clause the termination for convenience clause would impact the cloud services contracts. Second, the obligations of cloud service providers during the switching process. He suggested that the parties involved could agree on different levels of service provision and termination assistance during the contract. Third, the notion of functional equivalence for infrastructure services. According to him, the proposal should foster competition by creating transparency around switching costs but without dictating them. In addition, he pointed out that the obligations on cloud service providers to avoid unlawful transfers are disproportionate and unjustified. In conclusion, he affirmed that the restriction on data flows could hamper competitiveness in the data economy and it would be important for Chapter 7 to be further discussed in the Parliament and Council.

Laszlo Toth stated that the telecom sector supports the objective of fostering data sharing, data re-use across sectors and national borders. Mr. Toth stated that the sector has been collaborating with public administrations and, even in times of public emergencies, a compensation of costs would be appropriate and allow holders to cooperate with the data access requests. He highlighted the importance of the principle of contractual freedom and stressed that cloud switching and interoperability create a more competitive cloud and edge the market in Europe. As a result, increased competition between service providers helps to reduce costs for consumers and increase opportunities to maximise the value of data. Telcos are both providers and customers of cloud services. He underlined that it would be helpful if the obligations of the different actors involved in the data processing service value chain were clarified. The responsibility on the value chain could be allocated, considering the contractual relationship with the customer and the provider of the technology in use. In the end, he claimed that the Data Act is a step in the right direction to strengthen Europe's data economy.

Alberto Di Felice declared that, in order to make data sharing more possible and pervasive across the economy, a lot of organisational, technical and legal challenges need to be solved. The proposed Data Act is supposed to create a fairer data economy where the value is shared fairly. By defining the Data Act as a horizontal proposal, he pointed out that it would impact everyone and the ways data are shared, but it could be particularly unfair for some categories. Furthermore, it is fundamental to give access to data to users by regulating all types of data in different ways. According to him, one key concern in the proposal is the approach towards competition and the possible safeguards against abuse. It is required to open up the data and to run individually against data holders to prove if they have used the data to develop competing services, if they have abused or if they have used trade secrets. Mr. Di Felice claimed that, with more precise definitions and sefeguards, the proposed Data Act would be the central kernel for the European future.

Isabella De Michelis recognised that small and big companies in tech tend to have the same concern in terms of sharing. In fact, sharing has a cost and means investment in hardware, software and human resources. Furthermore, it implies to enter into negotiations with parties. After acknowledging that sharing is good for the European economy and internal markets, she stressed that sharing mush have a user-centric dimension. Therefore, the user needs to use a simple interface, to know the advantages and the purposes of sharing, as much as to trust the company to share data with. Otherwise, the user-centric dimension would not be part of the European values, as it has been advocated so far. According to her, the purposes for sharing are missing in the proposed Data Act. Users are not aware of the value of data, but the secondary market would need this value to become more transparent as well as be competitive in the acquisition of data. Ms. De Michelis concluded by affirming that markets shoud have the ability to evaluate the data ex-post and that the value of raw data is not intrinsic, but it can be measured only once it is used.