On 31 May EIF organised a debate, hosted by MEP Marina Kaljurand, on the war in Ukraine and the challenges for legislators and the digital sector. The MEPs were joined by the following guest speakers: 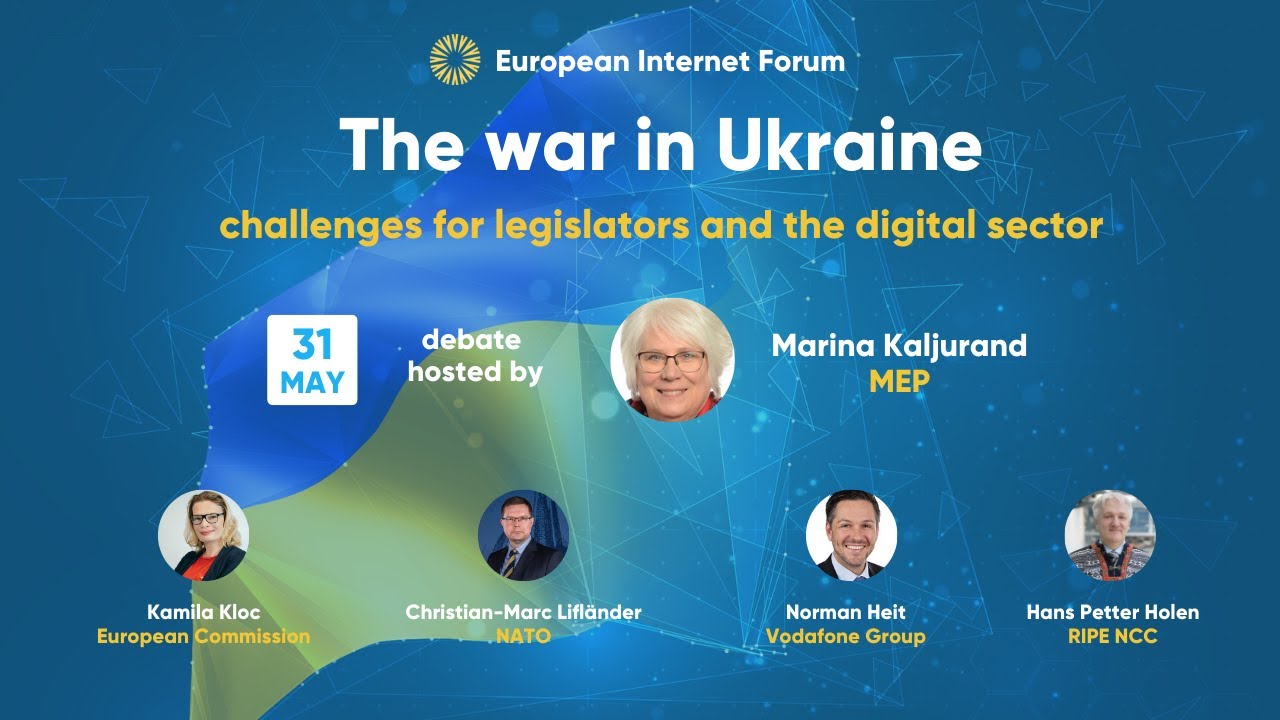 40:49
The war in Ukraine: challenges for legislators and the digital sector

MEP Marina Kaljurand set the scene affirming that cyber attacks have become a new normality and that Russia's war against Ukraine is multidimensional. The intelligence reports indicate that the Russian government is exploring options for potential cyber attacks also against the EU. Consequently, every EU organisation - large and small - must be prepared to respond to any disruptive cyber incidents. MEP Kaljurand shared the main points of the plenary session on cyber defense capabilities, that took place at the European Parliament. First, it is important to ensure that the European Commission, in close cooperation with ENISA, will protect EU critical entities and infrastructure against Russian cyber threats. Second, in view of the rise of cyber attacks and of the changing nature of warfare, the EU needs to overcome its current capability gaps in the area of ICT technologies and cyber warfare. Third, more cooperation and coordination between EU and NATO are needed. She concluded by affirming that the cyber revolution has not come to an end: the cyber and digital revolutions offer new opportunities, but also raise new challenges that need to be faced.

Kamila Kloc focused on the role of connectivity. EU is in constant contact with all operators in Ukraine, including the Ukrainian National Regulatory Authority (RNA) to support operators and to ensure roaming and international calls at affordable conditions to Ukrainian refugees that are now in the EU. She declared that the European Commission is working on different areas in terms of connectivity. First, she recognised the big contribution of European telecom operators, especially in the neighboring countries of Ukraine. Second, the EU work aims at ensuring that Ukraine is connected to Europe. Finally, there is a considerable amount of money committed by the EU in general for Ukraine, but also for digital. In conclusion, she provided a focus on the current challenges for legislators in the digital sector, mentioning the Digital Policy Programme and the importance of cooperation among Member States. With the current situation in Ukraine, this cooperation is critical to ensure that on many aspects - from skills, to connectivity, e-government, cybersecurity - Member States are moving together towards digital transformation.

Norman Heit pointed out that it is fundamental to take concrete measures to protect the business network staff, customers, and particularly markets that are bordering Ukraine. He highlighted the unity of the EU since the invasion of Ukraine also in terms of cybersecurity, mentioning the unprecedented collaboration between telecom operators and other industry peers. Mr. Heit deep dived into the resilient approach adopted by Vodafone. According to him, preparation for crisis management is critical to monitor and face the current challenges: this implies collaboration across international communities, peer groups, security communities, and with governments. In order to mitigate the challenges, a regulatory environment should allow European companies to scale up and make enough return on capital to invest into resilience topics, human resources and skill sets. In the end, he declared: “we must develop more effective partnerships, more cross-collaboration, more information sharing, and more public-private partnerships to try and forge alliance that are able to better address the issues”.

Hans Petter Holen declared that Ripe NCC has members both in Russia and in Ukraine, but also in countries - Syria and Iran - that have been subject to sanctions for a longer time. It is undeniable that sanctions have side effects. The main purpose of Ripe NCC is to maintain an open Internet, even in times of war. It is important that the infrastructure in the country under attack is still functioning. However, it is also important to have open and free Internet in Russia, so that Russian citizens can have balanced news and have the chance to know how the war looks like to the rest of the world. He declared that, based on the Internet rooting system that provides information about which part of the network still works - Internet in Ukraine has been quite resilient towards the attacks. His organization tries to be neutral: for him trying to stay out of the conflict and not being weaponised is one of the biggest challenges in current times.