On 20 April, EIF organised a debate, hosted by MEP Edina Tóth, on the European Chips Act and its pivotal role in reinforcing EU’s innovation, competitiveness and open strategic autonomy. The MEP was joined by the following guest speakers: 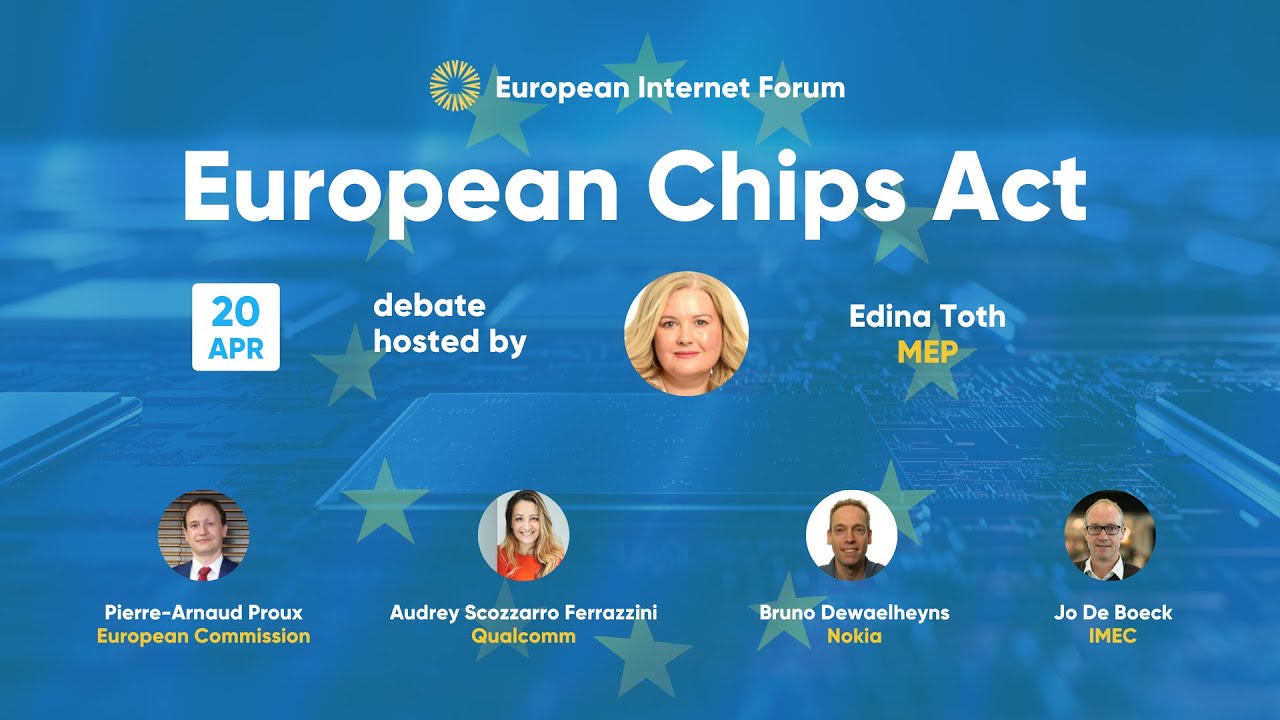 MEP Edina Tóth set the scene highlighting that the European Chips Act aims to ensure that the EU has the necessary skills and technological capabilities ‘to become a leader in the field, to secure its supply of semiconductors and to reduce its dependencies'. It is important to adopt a common approach for the European chip supply. MEP Tóth stressed that the proposed Chips Fund would facilitate access to finance for start-ups to help them mature their innovations and attract investors. She underlined two main points: first, the Commission aims at doubling the global market share by 2030 and producing the most sophisticated and energy-efficient semiconductors in Europe; second, the expansion of production capacity should be mainly driven by market demand. She concluded by affirming that the European Chips Act will certainly be a game changer for the global competitiveness of Europe's single market.

The European Commission representative, Pierre-Arnaud Proux, affirmed that semiconductors play an important role in the digital transition, but even in the twin transition and in the entire economy. However, the actors and countries that can produce chips are limited. Mr. Proux underlined that the European Chips Act falls under three pillars. First, the ‘Chips for Europe Programme’, to create technological capacities in Europe and to bridge the gap between research and production. Second, ‘Security of Supply’, to accelerate the implementation of production facilities and its regulation at a European level. Third, ‘Monitoring and Crisis Response’, to anticipate future crises by getting the necessary information. He recognized that Europe would remain dependent for some parts of the value chain in the production of semiconductors. As a consequence, the ambition is to move from an extreme dependency towards certain companies and certain countries to a more interlinked world of dependencies with European partners.

Audrey Scozzarro Ferrazzini, Senior Director in Government Affairs EMEA at Qualcomm and EIF Board Member, started her speech by declaring that chips are essential for the digital transition. In 2021, despite the crisis, more semiconductors were sold than any previous year in the world and this trend is expected to dramatically grow by 2030. Ms. Scozzarro Ferrazzini declared that Qualcomm - world leading company supplying semiconductor to customers - supports the European Chips Act and its ambition to boost production to 20% by 2030 and is in favor of an EU-US objective of reaching 50% of global production. It is fundamental to think collaboratively to build a geo diverse supply chain. She stressed the necessity of considering production capacity, talent, and R&D, and how governments can share information about demand. She concluded by highlighting the potential of the Trade and Technology Council (TTC) between EU and US to address common matters, create synergies and foster dialogue.

Bruno Dewaelheyns, Head Asic at Network Infrastructure group of Nokia, stated that chips play a crucial role in each of Nokia's businesses: divisions fixed networks, IP networks, mobile networks and optical networks. There are many distinct types of chips and Nokia has around 11 excellence centres for chip development in Europe. According to him, it is impossible to develop a generic chip that can be used in every market in the industry. Consequently, every product supplier needs to make a choice between building a product with general purpose processors or buying it. The Nokia chip design department focuses on all front-end design activities. This means having dependencies towards specific third parties. Mr. Dewaelheyns expressed hope that the EU Chips Act willwould help the sector in building an even stronger ecosystem for chip development in Europe, in order to address the challenges in the market - especially the telecom market - and to provide the network infrastructure.

Jo De Boeck, Executive Vice-President and Chief Strategy Officer, IMEC, highlighted that there is not a single high-performance chip worldwide without European technology. Europe plays a significant role in providing the tools, equipment and materials for manufacturing. However, for the ‘Security of Supply’, which is the second pillar of the European Chips Act, a lot of investments and skills are needed. Organizations like IMEC play an important role in conjunction with industry. The IMDs that produce and will produce in Europe need to find a solid base in this collaboration with institutions and leaders like IMEC. According to him, a lot of chips are being designed through cloud-based infrastructures, a software that is running virtually in the cloud. As a result, it is fundamental to promote this type of infrastructure and develop adequate skills throughout every member state. Mr. De Boeck concluded by stressing the necessity to create a demand through prototyping and invest in technology leadership in semiconductors.