On December 5th, MEP Lambert van Nistelrooij and EIF invited MEPs, members and friends for an exchange of views on “The growing role of social media in EU citizens’ engagement and democracy”. 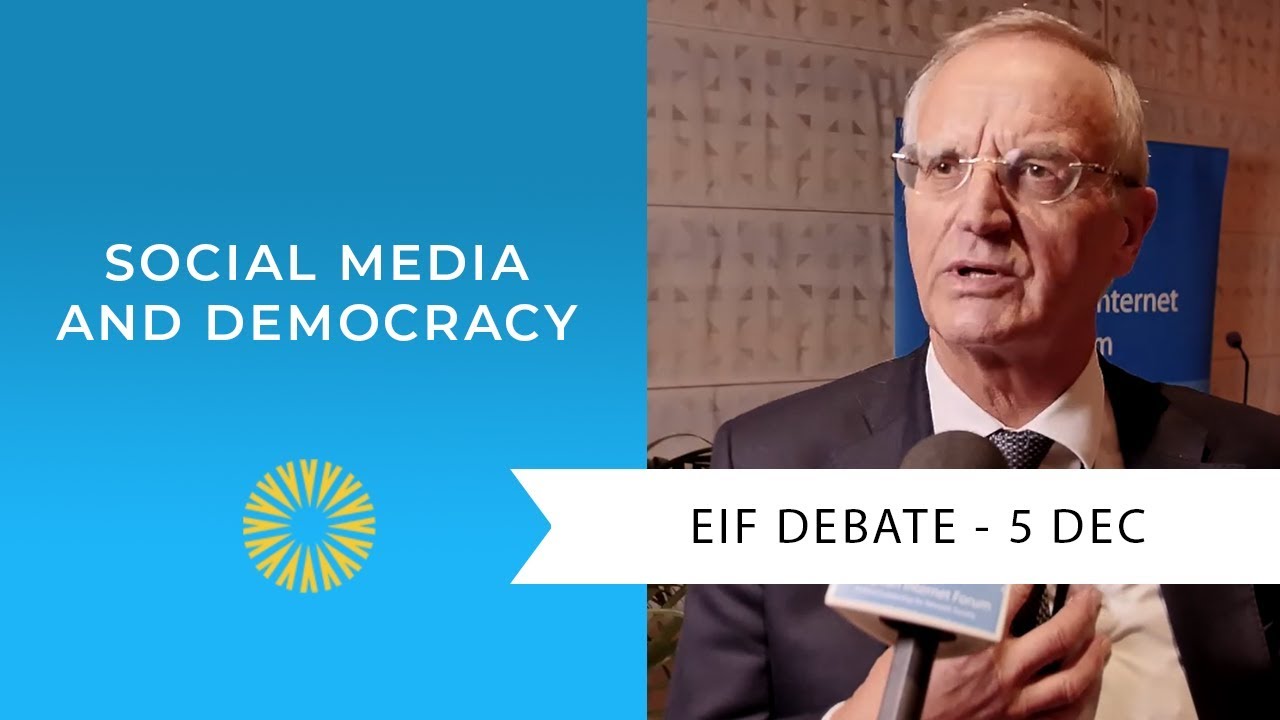 MEP van Nistelrooij set the scene by sharing with the audience the positive effect that social media has had during his campaigns, how it has maximized reach and engagement. Despite the positives, social media is nowadays also used for malevolent purposes and MEP assured the audience that fighting hate speech and misinformation is at the top of the EU agenda.

MEP Emilian Pavel seconded MEP van Nistelrooij’s positive remarks about the improvements that social media and technology have brought to the interaction between politicians and their constituency. However, the Facebook and Cambridge Analytica scandal have proven the use of data and psychological profiling to influence people’s votes, which is a threat to democracy. In his opinion, this can be counteracted through investments in education and media literacy, so that people do not take information for granted, but rather challenge it with a critical mindset, even in the online space, where everyone has a voice.

According to Jaume Duch Guillot, Director General for Communication and Spokesperson at the European Parliament, social media is one of the key ingredients in the media mix of the European Parliament for a few reasons: “first of all, because the only real way to communicate and to engage with the citizens is to be where they are”; also, social media allows the EU to practice ‘social listening’, through which the policymakers can talk to citizens, know what they think, what their interests, creating engagement and “reinforcing the legitimacy of the European Parliament”. Furthermore, the EP’s social media content is data-driven, with topics chosen from the concerns of the citizens in the Eurobarometer survey: “We try to switch from our priorities, the priorities of the institutions, to the real concerns of the citizens”.

Sean Evins, Politics and Government Outreach lead for EMEA at Facebook, reinforced the importance of being where the people are in order to engage with them, and reiterated the positives of social platforms with a focus on communities who engage in conversations or fundraise for causes: “recently, there has now been over 1 billion dollars raised for fundraisers and charities on Facebook”. When it comes to politics, people expect to see debate online, to have their voice heard, but they expect that their newsfeed is trustworthy. In 2016, Facebook was prepared for the challenges that were at that time, but not for the weaponisation of data: fake news, misinformation. Mr. Evins stated that the company he is representing is investing heavily in Machine Learning and AI in order to tackle all these challenges, to block the false information before it becomes public.

Re-Imagine-Europa is an incubator for new political ideas and its CEO, Erika Widegren, highlighted one of their two priorities: democracy in a digital society. Power is played out in the media and as we move from a space of mass communication to mass self-communication, we are using military strategies when it comes to communication. In her opinion, the real challenge is to figure out how to use the great technology that we have by taking away the negatives. Ms Widegren made a comparison between social media and a toxic river, where everybody is allowed to put whatever they want in it. Therefore, there is need for certain systems to be put in place in order to be able to make the river transparent and safe again, so that the future generations can benefit from it.

Pawel Rzeszucinski, Chief Data Scientist at Codewise started his intervention by stating that humans are not alone on social platforms, that algorithms in the form of social bots (for clickbait, vanity, or manipulation of perception) are used in order to profile and influence us. They find the psychological weaknesses through the collection of data (demographics, geographics, online customer profile, behavior etc). Mr. Rzeszucinski added that not much data is needed in order for an accurate profile to be created: 70 likes are sufficient to describe a person better than friends, 150 likes are sufficient to describe a person better than the parents and it takes 300 likes to profile a person better than a long-standing partner. Taking into account the ever-increasingly complex algorithms that are already in place, designed to alter the reality (deep fakes and laser phishing), people might become overwhelmed by the different versions of reality that they are exposed to and will shut themselves down, this constituting a threat to democracy. For democracy to work, different points of view are needed and in such a scenario “everybody can talk on social media, but not everybody gets heard” as non-human participants can outnumber and shadow whatever we say. It is essential that we act now in order to counter these increasingly worrying phenomena.