On January 29th, EIF invited all its Members & friends to kick-off the new year under the Romanian Presidency with a special reception on the ‘EU Digital Single Market for jobs, growth and innovation’. The event was co-hosted by MEPs Pilar del Castillo and Adina-Ioana Valean and featured Mariya Gabriel, EU Commissioner for Digital Economy and Society and Ambassador Luminita Odobescu, Permanent Representative of Romania to the European Union. 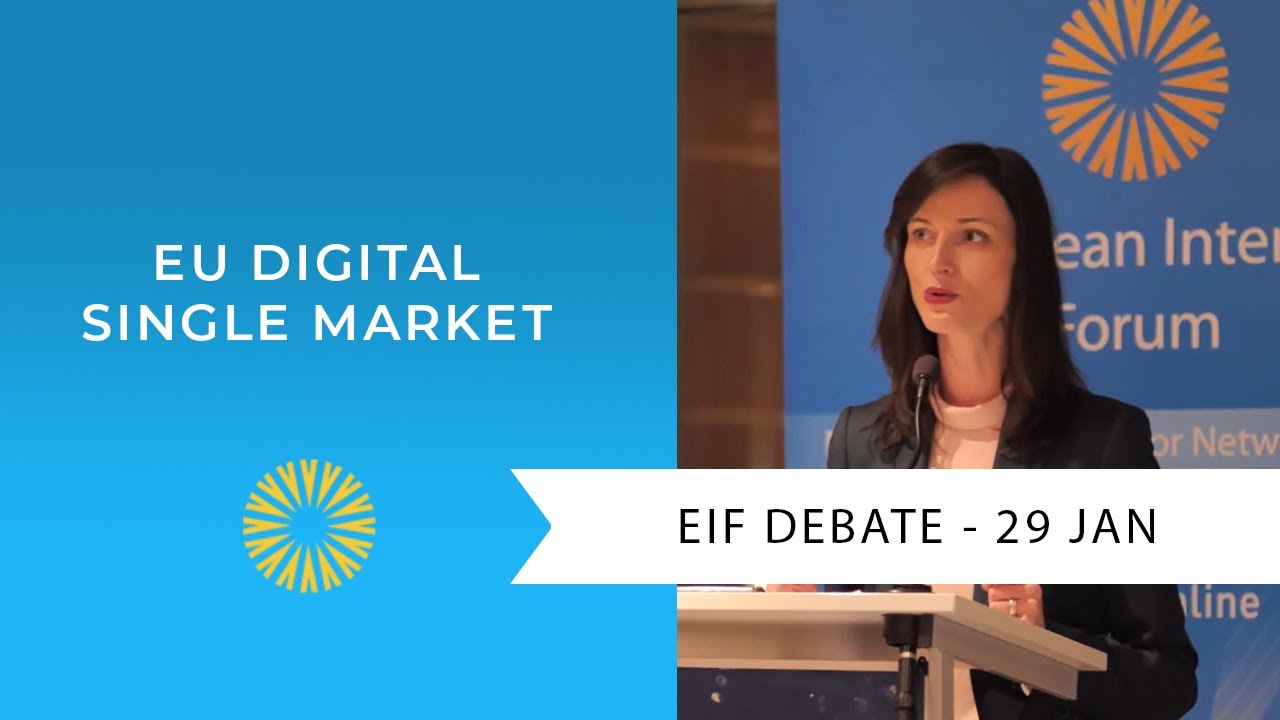 Commissioner Gabriel started her speech by stating that a lot has been achieved and most notably the European Electronic Communications Code. The main goal remains having a truly integrated DSM. Important steps have been such as the Launch of a European Strategy for AI - a clear signal that the EU wants its own high-performance computing.

‘We count on the Romanian Presidency to conclude some of the important files: ePrivacy, copyright, platform-to-business, cybersecurity legislative proposal etc. Trust is key and Europe needs to make sure that the society can cope with change.’

Moving forward, Commissioner Gabriel highlighted two additional areas of high priority for the Digital Single Market: 1. Scaling-up public and private investments: “We are lagging behind US, Japan, China or South Korea. Venture capital in Europe is only 1/5 than in the US. We do not monetize what we invent. We need a more courageous, dynamic and transformative Union.” 2. Designing a human-centric internet based on values. There is need for a digital society that is inclusive, in order to reap the fruits of the digital transformation.

The Commissioner stressed that without investing in people, it will be impossible to tackle the challenges related to the Digital Transformation. Finally, she addressed the issue of women in tech: ‘We need more women to promote the visibility of our women experts. We are entering a period that will define if EU is a leader in this new global economy or will it be overwhelmed by all these changes. The digitalisation of our economy is an important opportunity to evolve in the right direction. We don’t have time to shape the future. If collectively we address the challenges, we can really succeed’.

Ambassador Luminita Odobescu, Permanent Representative of Romania to the EU outlined the main priorities of the Romanian Presidency of the Council of the European Union: ‘we are paying a particular attention to the initiatives in the area of AI and Cybersecurity as they change and contribute to a stronger, more modern and trustful digital Europe. And trust is a key word.’

‘Our presidency agenda is ambitious but also pragmatic. We have reached a provisional agreement with the European Parliament on the reuse of public sector information, online sales of goods and digital contact. Europe has a great potential in Digital Economy and has the resources to be a worldwide leader.’
Ambassador Odobescu reassured the audience that ‘digital’ is high on the agenda and announced a few of the upcoming events: Startup Europe Summit 2019 (22nd of March - in Cluj, Romania) and the EU Digital Assembly (13-14 June – in Bucharest).

In conclusion, both speakers agreed on the need to build a digital society that is based on the EU’s strengths and fundamental values.