On 6th September, EIF organised a debate, co-hosted by MEPs Sabine Verheyen and Axel Voss on the EU proposed Artificial Intelligence Act with a focus on the role of AI in the cultural & creative sector. The MEPs were joined by the following guest speakers: 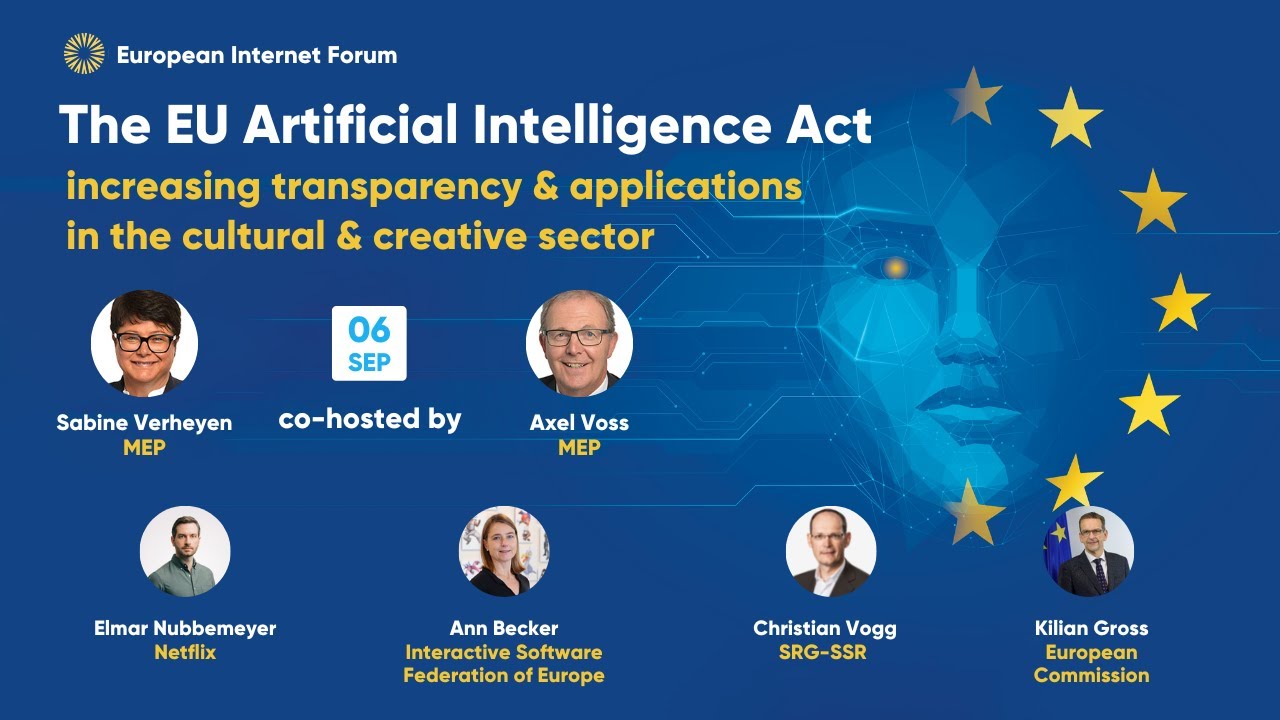 MEP Sabine Verheyen set the scene highlighting the relevance of the Artificial Intelligence Act, which has been discussed in the European institutions and will be the first legislation of its kind in the world. The multiple aims are: fostering trustworthy AI by design; preventing the rules from stifling innovation; hindering the creation of a flourishing AI ecosystem in Europe. MEP Verheyen recognised that artificial intelligence in the cultural and creative industries plays a critical role since it helps companies improve the services and enhance the consumer experience. She acknowledged that AI applications improve editing and production processes, videogame development and creative contents.

Elmar Nubbemeyer explained how, at Netflix, AI enables a better product experience and he provided some examples. Mr Nubbemeyer stated that “the most important and powerful data that we can use is what a member has watched and what members like them have watched”. However, he declared that AI is a helpful tool, even though is never used to make decisions about which content to buy or to create content from the ground up. It is clear that human presence will not be replaced: having human decision making involved is pivotal to create great content.

Ann Becker explained how AI is adopted in the creative aspects of video games: helping the artists in the video game development; supporting the creative directors to focus on narratives and other creative aspects of the content creation; managing environment effects and improving the animation quality through use of motion and facial capture. However, AI is also applied to the non-creative and non-interactive aspects of the game. Ms. Becker affirmed that the Interactive Software Federation of Europe (ISFE) welcomes the risk-based approach of the AI Act, stressing that an international definition, particularly the OECD definition, would provide further clarity to developers, businesses and the creative sector. She closed her speech by pointing out that, in the Commission proposal, the specific reference to freedom of expression and the right to the freedom of arts is crucial for the games sector.

Christian Vogg opened his speech declaring that nowadays media business is completely data-driven and that AI can be divided into four categories: meta-data generation; research for information and content, production of media assets, and the user-centered view. At a practical level, within the media and broadcasting sector, AI-driven tools facilitate the research of content in an archive, the analysis of video and audio content in a very short time, for instance through automatic transcription and subtitling. What is more, he affirmed that avatars are used for instance to highlight the dangers of fake realities in schools. According to the ethical guidelines of SRG-SSR, avatars are not used in the journalistic environment: this is a good example of the balancing act of AI in the media sector. According to him, AI needs an appropriate regulation that should be adapted to the real business even considering existing risks.

The European Commission representative, Kilian Gross, affirmed that the AI Act is, first of all, an internal market legislation. The Act is characterised by a risk-based approach which is described in a pyramid encompassing the levels of risk: unacceptable risk; high risk systems, for instance autonomous cars or recruitment processes; AI with specific transparency obligations; minimal or no risk. Cultural applications are not in the Annexes that list AI-based products. According to Mr Gross, “culture is, of course, very important, but it's not so risky”. However, there are targeted obligations for all AI systems and citizens should be informed if they interact with AI: deep fakes are the most relevant example for the cultural and creative sector. He concluded by affirming that, among the number of Acts that the European Commission presented recently - DSA, DMA and Data Act – even the AI Act must be recognised as foundational for the digital era.

MEP Axel Voss provided an overview of the discussion, underlining that AI is an important instrument and that a risk-based approach as much as an international definition of AI are required. However, it is fundamental to further clarify what a high-risk system is. Mr. Voss stressed the plurality of different approaches to the AI Act: whereas the European Commission conceived it as a product regulation, the European Parliament has been considering it even a consumer protection law. After having defined AI as a booster for the digitalization, MEP Voss declared that overregulation and an excess of bureaucracy should be avoided, in order to have a flexible legislator that can react promptly.