On November 21st, MEP Eva Kaili and EIF invited MEPs, members and friends for an exchange of views on how the EU institutions build on the current platform proposals as a stepping stone to create a cohesive European digital platform approach that can boost the economy and re-introduce trust in the online space. 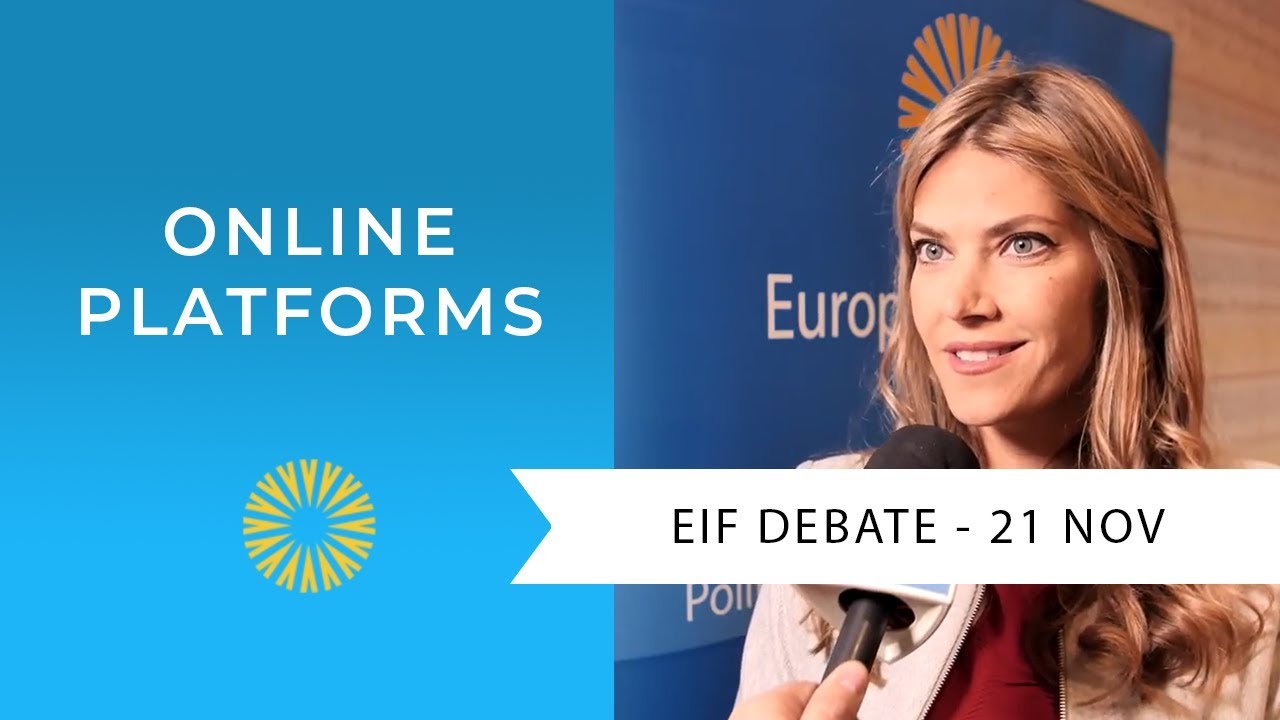 The discussion was opened by MEP Eva Kaili, who started by acknowledging the value of online platforms while highlighting that “self-regulation is maybe not enough, we need to regulate, to be supportive, based on principles” but at the same time protect business and encourage innovation.

Werner Stengg, Head of Unit E-Commerce and Online Platforms, DG CONNECT, European Commission pointed out the importance of addressing the entire ecosystem when regulating ‘online platforms’: there are platforms of different sizes, new entrants versus established players etc. Although the aim is to improve the platform economy, it can easily be disrupted. “We must not create hurdles that would make it impossible for new platforms to emerge.” Mr. Stengg then added that the Commission’s proposal also focuses on consumers, as without a balanced approach, they can be affected. Evidence is key: “We must be as evidence based as possible. First, you need to fully understand the status quo before you changed. Secondly, you need to be aware of the intended and unintended consequences of your actions”, he concluded.

“The Digital Single Market that we are all part of this day is one of the most ambitious and unifying digital policy projects ever undertaken. It has enabled innovation and businesses to thrive” stated Thomas Myrup Kristensen, Facebook’s Managing Director EU Affairs at the beginning of his speech.

In his opinion, flexibility is essential and a solution must be scalable for all platform sizes.  Mr Kristensen outlined Facebook’s use of Artificial Intelligence for combatting misinformation, hate speech and terrorist content, but called for cooperation between organisations in order to effectively eradicate these practices. Moreover, he believes that the model in which government and industry work together in co-regulatory schemes is the way to move forward, as “expert industry input can help ensure that scheme is flexible and effective while dealing with particular challenges”.

James Waterworth, Director EU Public Policy, Amazon stressed the importance of very clear regulation and particularly clearly defining “platforms”, as they are very different in terms of the way they operate and the needs that they have.  He then raised the question of how to construct a virtuous triangle in order to achieve a stable environment for businesses and intermediaries, a great experience for customers and to continue to deal with societal challenges. It is important to address these in a balanced way, as favoring one could lead to the others being penalized.

The need of addressing ‘online platform’ regulation was also acknowledged by Jean-Philippe Monod de Froideville, VP Government and Corporate Affairs at Expedia Group, who briefly explained the way in which the market works, when it comes to the online travel agency world. The proposal on the table is a good step, it starts with transparency but it should be avoided to create a regulation that is going to go into very specific issues between companies. He expressed his concern regarding entities such as hotels which operate as online platforms, without being regulated as such. Moreover, he stressed that, when it comes to discussing this topic in the European Parliament, the evidence must be on the table and the complexity taken into consideration. Mr. Monod de Froideville concluded by stating that unintended consequences of a specific piece of regulation that might be introduced, certainly requires review for what it could mean for other sectors.

Olivia Regnier, Director EU Regulatory Affairs at Spotify highlighted that some platforms use the privileged position of an intermediary between businesses and consumers to control or distort their interaction: “They move from being a gateway to becoming a gatekeeper”. She added that the risk is particularly high when the platform controls or owns a downstream business which competes with other services that they give access to. In some cases, businesses are dependent on platforms, not having many alternatives to access the consumers and therefore a weak bargaining power. Such situations affect the possibilities of businesses to grow, affects the consumers’ choice and ultimately innovation. Ms Regnier called for ‘minimum rules to the game’, which is what the Commission aimed with their proposal. “Transparency is not enough to achieve fairness”, she concluded.

Finally, Joakim Reiter, Group External Affairs Director, Vodafone tackled the discussion from a principle point of view. He supported the other speakers’ opinion that transparency is a good start, but it is insufficient. In Mr. Reiter’s opinion, rules are needed in order to prevent ‘gatekeeping’ and the Commission’s approach is far too cautious: “It is absolutely no reason for anyone who has a gatekeeping role to not play by certain rules like non-discrimination, non-abuse of bargaining power etc”. Although he admitted that Vodafone has the role of a gatekeeper with massive bargaining power, Mr. Reiter stated that most European companies simply do not have this privilege and therefore basic decency in terms of substantive rules for a fruitful digital ecosystem is key.