On 27 April, EIF organised a debate, hosted by MEP Victor Negrescu, on the skills in the digital world and their role towards inclusive transformation. The MEP was joined by the following guest speakers: 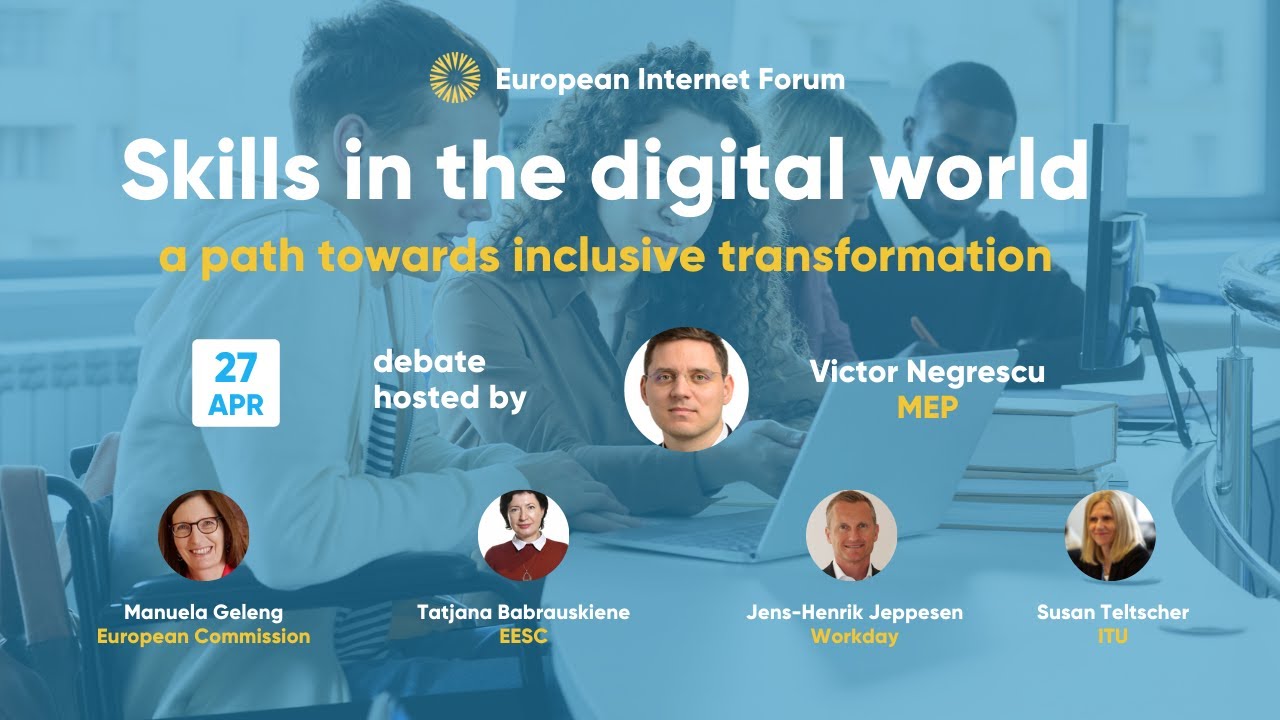 45:25
Skills in the digital world: a path towards inclusive transformation

MEP Victor Negrescu underlined the importance of improving digital skills across Europe to tackle the current inequalities also amongst member states. It is fundamental to find a way for each individual, each organization, each private partner that wishes to participate to the process, to find a specific and clear place in this design that we want to implement at European level. According to him, it is fundamental to develop skills for the currency of the future. Firstly, developing ownership and how to acquire and access skills. Secondly, the mobility of skills that need to be recognised and certified across Europe and across the world. Thirdly, designing a clear perspective to ensure the quality of training, for instance with certificates recognised by the labour market. Considering the labour market, the social dimension has an important role to play. He concluded by declaring that there are several programs supporting inclusive transformation, such as the Digital Europe Program, the Connecting Europe Facility and the Revovery and Resilience facility.

The European Commission representative, Manuela Geleng, opened her speech by stating that the majority of jobs require digital skills and a lot of efforts have to be taken across Europe. Ms. Geleng dived into the Skills Agenda that was adopted in 2020 to set out a number of initiatives: the Pact for Skills to create up-skill and re-skill opportunities through large scale partnerships, both public and private; a proposal for a Council Recommendation on micro-credentials, to recognise the skills that workers have acquired; a proposal for a Council Recommendation on vocational education and training (VET). She also mentioned other activities: the Digital Education Action Plan to make the education ecosystem highly performing in digital education; the Structured Dialogue on digital education and skills to bring forward digital skills in Europe; the proposal for the Declaration on European Digital Rights and Principles to make the digital transformation inclusive and accessible to everybody. She concluded by declaring that the EU has put forward enormous funding focusing on where digital skills can be really supported both in the recovery and resilience plans.

The member of the European Economic and Social Committee, Tatjana Babrauskiene, recognised technology as a powerful tool for formal and informal education opportunities but affirmed that statistics show the dramatic inequalities of digitalization in both school education and labor market. In general, the most affected categories are children, women, minorities, young and vulnerable people. For instance, there is a huge difference between high skilled workers who benefit from training opportunities and those that, despite performing essential roles in society, do not have access to lifelong learning opportunities. She said that “digital skills are essential for citizens’ empowerment. It is estimated that there will be tens of millions of jobs for people with advanced digital skills in the coming years”. Ms. Babrauskiene highlighted the importance of transformative education, which involves the transition from traditional education to a sustainable-oriented model. Education for sustainable development with a strong digital focus should involve work at the level of formal and non-formal education and should include the creation of training centres.

Jens-Henrik Jeppesen stated that Workday is a provider of enterprise cloud applications for finance and human resources. Nowadays, companies deal with significant shifts in the world of work. As a consequence, an increased focus on skills is needed for a more inclusive transformation. Mr. Jeppesen declared that Workday works on a skills cloud that “uses machine learning to infer, validate, verify skills in the workforce, and it creates a universal language for describing them”. According to him, the European Commission has adopted a similar technology approach with the European Skills, Competences, Qualifications and Occupations (ESCO), which is a sort of dictionary describing, identifying and classifying different types of skills and professional qualifications and it is usable across different member states. He concluded by affirming that these types of technology may connect people to new opportunities, create new career paths and support the development of a dynamic understanding of skills and capabilities in the workforce.

Susan Teltscher, Head of Capacity and Digital Skills Development at ITU, declared that the organization she represents aims to develop the digital capacities and the skills in the member states with three main focuses: training interventions for ICT professionals and policymakers; development of human skills at a basic and intermediate level; development of knowledge and resources. She provided some data to underline the digital divide not only in Europe, but also globally: for instance, 38% of the world population is not using the Internet and 66% of school-aged children have no Internet access at home; 65% of people in developing countries lack skills to use the Internet. In order to support the digital skills development, it is fundamental to consider the digital divide and the access to internet. She affirmed that ITU tries to strengthen the skills and capacities for girls to promote and raise awareness of the importance of promoting girls and women in ICT. Amongst the ITU activities, Ms. Teltscher highlighted the Digital Skills Assessment Guidebook for the standardization of skills with the aim to help the member states to first do a national digital skills assessment.