On 27 September EIF organised a debate, hosted by EP VP Eva Kaili, on the EU proposed European Health Data Space (EHDS) with a focus on the access to electronic personal health data and their protection and regulation in research and development. The European Parliament Vice-President was joined by the following guest speakers: 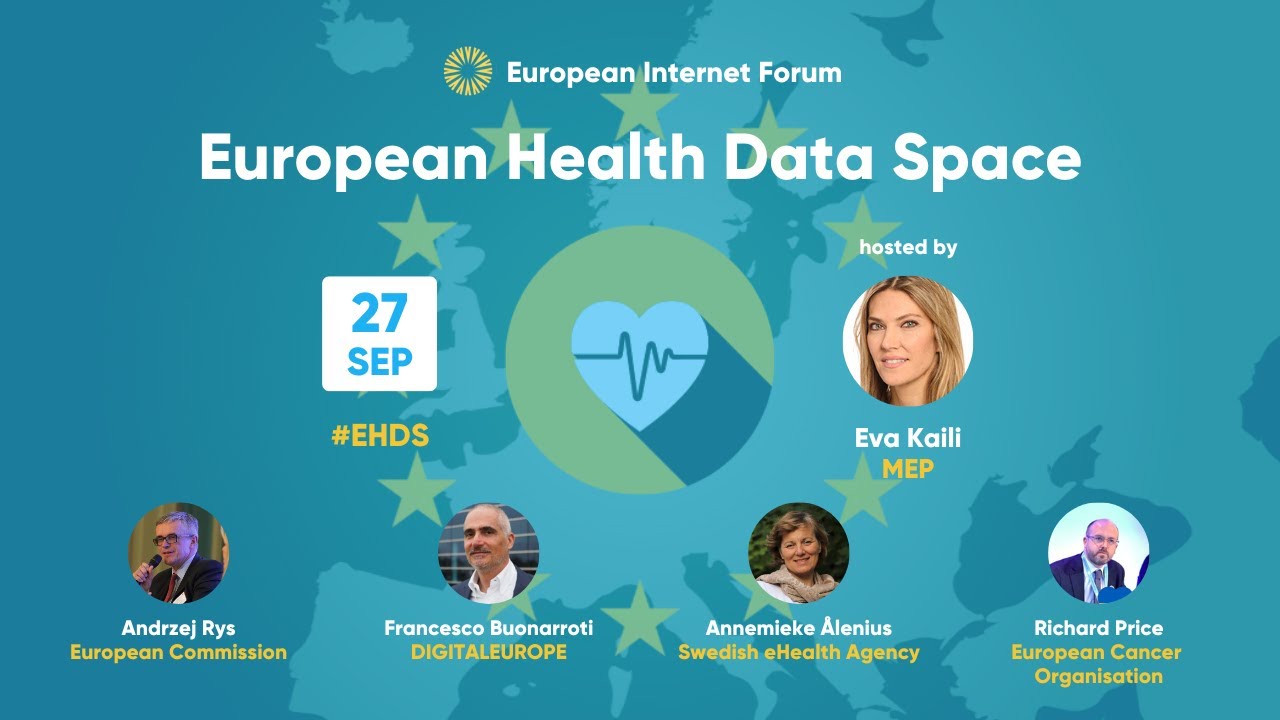 Vice-President Eva Kaili set the scene defining the European Health Data Space (EHDS) not only a crucial element of the European Health Union, but also a real breakthrough in the way patients could access their data. Ms Kaili declared that industry represents a further layer in the use of health data and that using anonymous data could be very helpful in research on innovative treatments. However, access to data must be done in compliance with GDPR. She mentioned the approach of the European Health Data Space, based on two distinct uses of health data: the primary use aims to guarantee better health care at both national and cross-border level, to allow citizens access their health data and make them available; the secondary use has the purpose to inform and access public health policies and conduct research. The VP declared that this proposal is crucial to have a governance at the European level to address problems that will occur. She concluded by acknowledging the fundamental role of patients’ associations.

As already highlighted by VP Kaili, the European Commission representative Andrzej Rys, defined the European Health Data Space as a pillar of the European Health Union. Mr. Rys, co-author of the proposal, affirmed that it is crucial that data are firstly collected, secondly shared and thirdly moved to extend this proposal to different sectors. He explained that primary health data are produced in hospitals and at doctor’s offices and they are potential research data. The quality of primary health data is very important for the output of the research and for the R&D sector. Another important issue is about how trust can be achieved to the governance and how data are protected. The third point he mentioned refers to the tools used in collecting data which implies buying new software and new databases. He pointed out that governance has a role to play in making sure that citizens - but also researchers and industry - understand how to access those data, and deal with their potential and challenges.

Francesco Buonarroti recognised that the convergence of science and technology is opening new possibilities for research. Unlocking the health data, unmet needs can be addressed, and better treatments and social support can be provided. He denounced the fragmentation and lack of interoperability of standards and he highlighted the importance of sharing health data over borders which implies an active collaboration across member States and a more harmonised approach in the implementation of privacy rules. Based on the report that DIGITALEUROPE published in 2021, Mr. Buonarroti mentioned the four pillars to build a trustworthy digital health ecosystem: first, the benefits for all the health communities; second, ensuring a secure and interoperable infrastructure allowing for the very sensible data; third, leverage existing health data; fourth, the problem of digital health literacy for patients and practitioners. He concluded by stressing that European rules should be armonised while innovation should be incentivized.

Annemieke Ålenius provided the example of Sweden that has a huge amount of public health data. In Sweden, inhabitants have large rights to access public data. This is the result of a culture of transparency, based on the principle of public access. She affirmed that, according to one of the latest surveys conducted, the great majority of Swedes want to share their health data: trust is indeed the most important condition for sharing data. Ms. Ålenius recognised the ambition of the European Health Data Space, but she even stressed that it should be a very careful process: “if we affect the people's will to share their data, then we will get bias in the data”. Although working with minimum data sets, increasing interoperability and improving the digital literacy plays an important role, individuals that want to share their data are indispensable for the European Health Data Space.

Richard Price expressed the interest of the European Cancer Organization and the cancer community in health data and oncology data cooperation. However, he pointed out that a sense of responsibility and urgency need to be considered. According to him, the main barriers to deal with are: regulatory barriers, lack of standardization, interoperability, and sometimes lack of political will. The first aspect to consider is to get trust and, according to him, the legal proposal might be improved in the governance section. The other aspects that Mr. Price focused on regard: the implementation barriers and the necessity to first investigate on the impact of the GDPR; the implementation and the lack of interoperability in areas like cancer registries; the implementation support. Although some challenges might be similar across the Member States, he highlighted that patient safety, patient data safety and confidentiality are mutually exclusive for the powerful European Health Data Space.