On 1st of July, EIF organised a virtual debate titled "Rebuilding Europe through digital transformation", which was co-hosted by MEPs Pilar del Castillo and Ivan Stefanec. 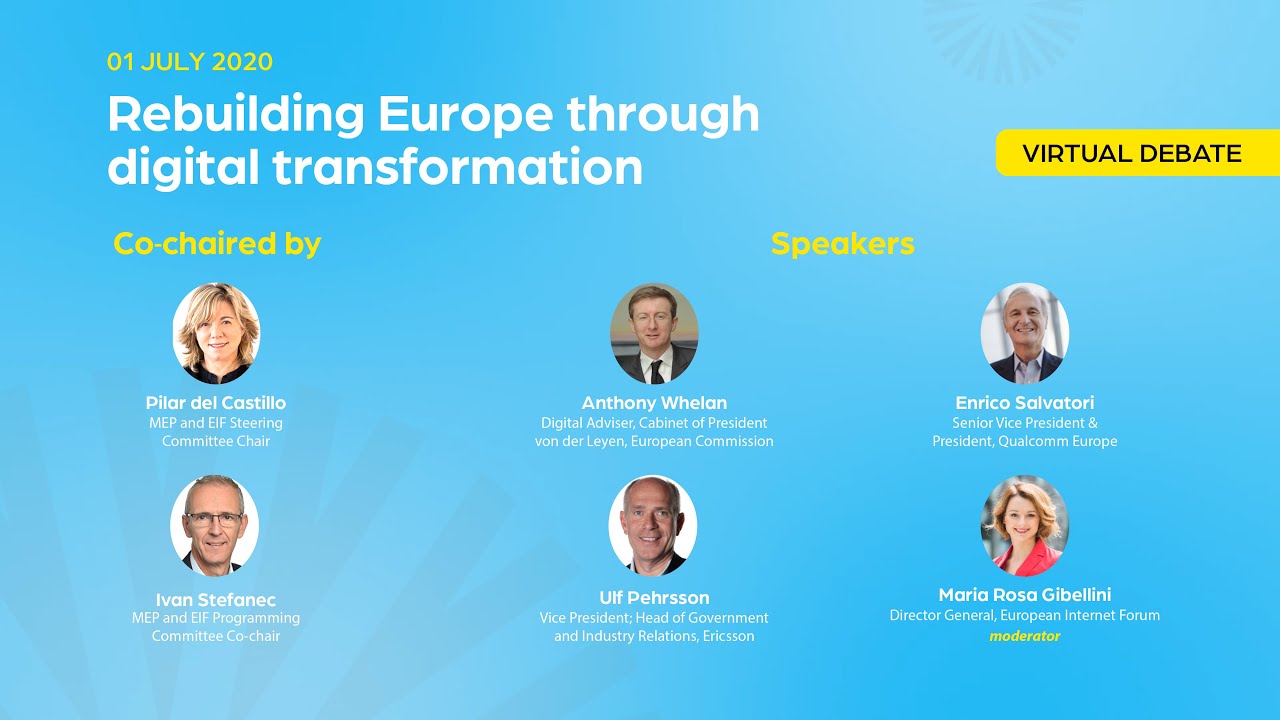 MEP del Castillo set the scene by stating that the most important lesson during this pandemic has been that “the EU has to move up a gear in its digital transformation.” In MEP del Castillo’s opinion, this will require political drive for measures such as financial support for SMEs to adopt adequate digital skills and the latest digital technologies and forms of connectivity. Moreover, the EU needs to “ensure the digitalisation of its strong manufacturing sector by funding the take-up of IoT or supporting measures for the rollout of 5G and fast connectivity”, she added.

MEP Ivan Stefanec seconded MEP del Castillo’s views, stating that “without digital solutions the recovery is not possible” and that we should “prioritise digital at the same level as decarbonisation”. There is a need of improving digital infrastructures, in order to fundamentally change our operating procedures. MEP Stefanec also highlighted the role of SMEs in this recovery, which should be helped by the EU in cutting administration costs.

Anthony Whelan shared the European Commission’s views on the key areas for the digital recovery, among which are connectivity, strategic digital value chain and data economy. Mr. Whelan said that Member States must build bottom-up their recovery plans, while being aligned with green and digital priorities. We should see investments in quantum technologies, cybersecurity, secure processing of Big Data, 6G and much more. In Mr. Whelan’s opinion, trust in digital needs to be ensured: “cybersecurity will remain an area of focus”. Access to skills will remain an area of opportunity but also of concern as “in the midst of a crisis we still have unfilled jobs due to lack of skills”, Mr Whelan concluded.

Enrico Salvatori of Qualcomm Europe shared a first industry perspective with the audience, stating that Qualcomm welcomes the European Commission’s approach of boosting investment in digital, that the plan was good even before the crisis but the focus should fall on the execution or an acceleration of the plan. In Mr. Salvatori’s view, the two pillars in technology are connectivity and the intelligence of connected devices: “5G and AI will drive the next steps in terms of technology and applications”. With regard to the next steps for the acceleration of the plan, Mr. Salvatori identified making 5G spectrum available and coverage: “5G is a bridge to move to new industry sectors with a focus on automotive and industrial”.

A second contribution from the industry perspective was offered by Ulf Pehrsson of Ericsson who started his speech by highlighting that “network traffic loads shifted from city centers to suburban areas” during the crisis, reinforcing the necessity of connectivity. Mr. Pehrsson shared a few key findings from Ericsson’s latest Mobility Report: firstly, digital infrastructure is key for meeting communication needs in times of crisis and secondly, providers continue to invest and switch on 5G in the world despite the pandemic, as “5G is expected to be the fastest deployed mobile communication technology in history.”

According to Mr. Pehrsson, Europe will partly suffer from the delays in licensing 5G, remaining behind Northeast Asia and North America. “The EU must continue to remove barriers for such investments in order to secure a timely deployment. 5G is important in delivering carbon neutral growth” and “will unlock the digitization of ecosystems”. In conclusion, Ulf Pehrsson stated that “5G has an exponential potential in restarting economies and building societal resilience and investment in digital infrastructures must come first”.